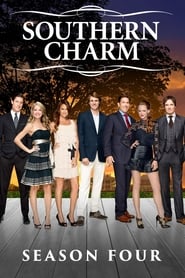 In season four, new friendships are tested and old relationships start to sour. Thomas and Kathryn have officially parted ways, leaving Thomas to become Mr. Mom to their two children. Kathryn is focused on rebuilding her life in Charleston. As she approaches her 33rd birthday, Cameran is faced with a decision about pursuing motherhood, all while trying to help Shep live on the straight and narrow. Shep’s protégé, Austen, joins the group and is eager to prove that he is anything but the new Shep. As Craig realizes he’s become the outcast of the group after years of telling half-truths, Landon finally gets her online start-up venture off the ground. In addition to her business, Landon moves to rekindle her friendship with Thomas now that Kathryn is out of the picture, however, getting involved with Thomas means the drama is never far behind.