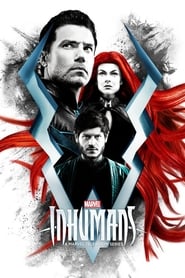 In the island of Oahu in Hawaii, an Inhuman, Triton, was chased and was shot by a strike team, and jumped into the sea. On the Moon, there is a secret city of Inhumans, which the humans cannot see, Attilan, where the King Black Bolt and his Queen Medusa live in peace with the rest of the Inhumans of the city. But there are others who after they exposed to Terrigen they don’t develop powers, and as a result, they work in the mines. King’s brother Maximus, decides with the help of Auran and the Royal Guards to take over Attilan in order to send everyone on Earth and to stop hiding from humans, something Black Bolt is against it. Medusa’s sister Crystal has a huge dog Lockjaw, who can instantly transport anyone it touches. Crystal tells Lockjaw to transport to Hawaii Karnak, King’s advisor, Medusa and Black Bolt, just before Maximus detains them. Later Maximus sends Auran to capture or kill the Royal Family.