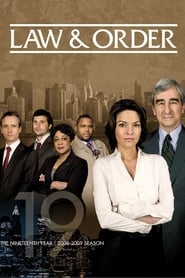 The 19th season of Law & Order premiered on NBC on November 6, 2008, and concluded on June 3, 2009. This was the third time in the series where there were no changes in the cast from the previous season and the last season to air on Wednesday nights at 10PM/9c, Law & Order: Special Victims Unit has claimed the slot off-and-on from Fall 2009 to present.

The series had a decline in the ratings from being in competition with CBS’s CSI: NY. Certain episodes spiking when CSI: NY episodes were repeats when Law & Order episodes were new.