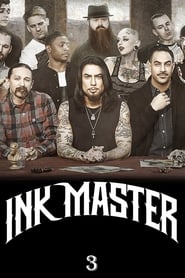 Ink Master (season 3) is the third season of the Spike tattooing competition series, Ink Master. Its makeup and rules mimic those of season 2, with some changes to make it unique from the previous season, but not so extreme to make it stand out from the series.

Season three follows sixteen tattoo artists competing against each other in an elimination-style competition that will leave the last person standing with the title of Ink Master, a $100,000 grand prize, and a feature in Inked Magazine. The show is hosted and judged by Jane’s Addiction guitarist Dave Navarro. Other judges include former Miami Ink cast member Chris Núñez and accomplished tattoo artist Oliver Peck.

Season three is the first time in the series a contestant has been brought back for another season. Katherine “Tatu Baby” Flores was eliminated in season two, but voted to return by Ink Master’s Facebook voting.