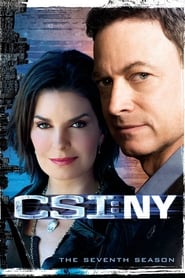 The seventh season of CSI: NY originally aired on CBS between September 2010 and May 2011. It consisted of 22 episodes. Its regular time slot moved to Fridays at 9pm/8c. The premiere, “The 34th Floor”, concluded the story from the previous season’s cliffhanger finale, “Vacation Getaway”.

The season introduced a new regular character, Jo Danville, after regular Stella Bonasera moved to New Orleans to head up their crime lab. Melina Kanakaredes, who played Bonasera, did not renew her contract.[2]