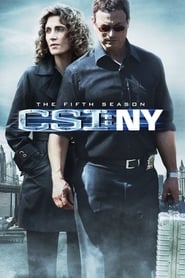 The fifth season of CSI: NY originally aired on CBS between September 2008 and May 2009. It consisted of 25 episodes. Its regular time slot continued on Wednesdays at 10pm/9c. The premiere, “Veritas”, concluded the story from the previous season’s cliffhanger finale, “Hostage”.