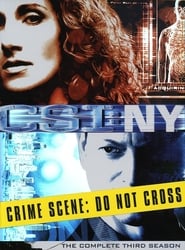 The third season of CSI: NY originally aired on CBS between September 2006 and May 2007. It consisted of 24 episodes. Its regular time slot continued on Wednesdays at 10pm/9c.

Episode 22, “Cold Reveal”, crossed over with a visiting character from Cold Case.