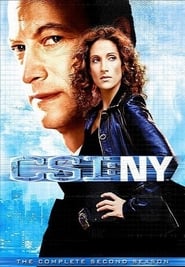 The second season of CSI: NY originally aired on CBS between September 2005 and May 2006. It consisted of 24 episodes. Its regular time slot continued on Wednesdays at 10pm/9c. The season introduced a new regular character, Lindsay Monroe, after regular Aiden Burn was fired. Vanessa Ferlito, who played Burn, wanted to leave the series to pursue her film career.

Episode 7, “Manhattan Manhunt”, was the second part of a two-part crossover with CSI: Miami.