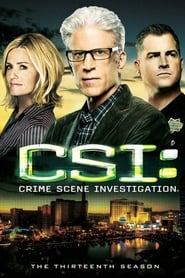 The thirteenth season of CSI: Crime Scene Investigation premiered on September 26, 2012 on CBS and concluded on May 15, 2013.

In episode thirteen of the season, CSI staged a two-part crossover with its spin-off show CSI: NY in which Gary Sinise marked his first appearance in CSI and as his CSI: NY character Mac Taylor; Cast member Ted Danson subsequently appeared in the CSI: NY portion of the story.

Former cast member William Petersen also returned as Gil Grissom for a voice over in the episode “Dead Air”, on the phone with Sara. This appearance was uncredited. On March 20, 2013, CBS renewed CSI for a fourteenth season, scheduled to air in the fall of 2013.